Annabel and Simon attended the Country Land and Business Association (CLA) Institutional Landowners Group (ILG) summer meeting on Thursday 18th and Friday 19th June 2015, hosted by the Duchy of Cornwall Estate in Dorset, and seemingly effortlessly organised by David Curtis (Chief Land Agent to the Duchy of Cornwall and current chairman of the CLA ILG).

Friday 19th June, saw just over 20 members of the ILG visit the Duchy of Cornwall’s Poundbury Development and Fordington Estate, including a trip to JV Energen LLP’s Rainbarrow Farm Anaerobic Digester (AD) Plant and thereafter a farm walk including a trip up Maiden Castle overlooking Poundbury itself.

Starting the day in Poundbury’s Queen Mother’s Square, the group were shown around the visionary development by the Estate Director Simon Connibear and his Deputy Ben Murphy as well as the Duchy of Cornwall’s Chief Executive Alastair Martin. The group were fortunate enough to be joined on the day by Poundbury’s masterplanner Leon Krier, who was appointed by HRH the Prince of Wales himself after West Dorset District Council selected the Duchy land for the expansion of Dorchester in 1987. 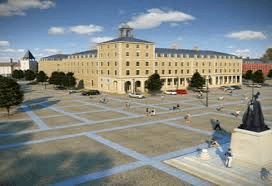 Poundbury is now home to 2,500 residents with 170 businesses and their 2,000 employees. Both Annabel and Simon found the masterplanning of the town fascinating and would recommend that anybody involved or interested in urban planning and development visit. The 250 acre development is jam packed with concepts barely touched upon by many other UK developments, and those which the Woolley pair found most fascinating were:

1. The irregular street layout and lack of road markings and signs which subliminally encourage drivers to be cautious and courteous. It took a little bit of getting used to a first, but the very low accident rate proves that it works.

2. The seamless integration of affordable and market housing – there is no risk of ‘ghettos’ emerging, as is seen in urban areas where affordable housing is very distinct and separate from market housing.

3. The extension town has been developed in four quarters, and the development has predominantly been carried out by small to medium sized, local developers, who have been bound by contract to build to very high quality of design and workmanship. 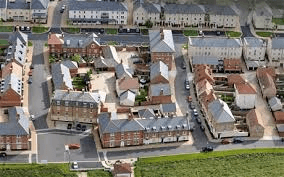 The pair did notice however, that the town was very quiet with very few people milling about, which raised the question of how many of the small boutique retail businesses stayed afloat. The Estate Director confirmed that most retail outlets survived through online sales. A number of the ILG members commented that perhaps the development was too heavily designed – though subsequently the average house prices are considerably higher than the national average. However, this has probably led to the average age of Poundbury residents is apparently 15 years higher than the rest of Dorset.

The visit to the Rainbarrow Farm AD plant was extremely interesting, particularly as the plant is the first biogas to grid plant as well as being the most efficient of its kind in Europe. Here it was explained that one of the biggest issues to be considered with AD Plants is the acquisition of inputs (food waste and crops). Food waste contracts are now difficult to come by, furthermore supermarkets have dramatically reduced their food waste production – Waitrose only produces 10,000 tonnes of food waste a year, which would only feed the Rainbarrow Farm AD Plant for a couple of months. Disposal of the digestate bi-product is also an issue – whilst the digestate could be a fantastic bio-fertiliser for agriculture and horticulture, there are currently some quality control issues where plastics can be found in the digestate. Despite prior pasteurisation of food waste before it is delivered to the AD plant, some are not keen to use the digestate as fertiliser over fears it could harbour harmful bacteria.

Finally, there was a tour of Maiden Castle farm, hosted by the Hoskin family. The tour highlighted the difficulty many farmers face when their holdings are located on the fringes of urban development. The growth of Poundbury has led to a number of problems for the Hoskins, with fences cut and gates lifted off hinges on a weekly basis by locals who perhaps feel that it is their given right to roam the countryside freely. Subsequently this leads to the escape and loss of animals, which costs the family an estimated £5,000 a year.

This was Annabel’s first time attending an ILG meeting, and Simon’s second – and whilst they may be very new to the group, they were very well welcomed to the session, which was very informative and gave both the opportunity to meet other members, and learnt a huge amount.